The second round of oral history interviews were carried out by Geraldine O’Connor from Clones ICA. These included members of both Clones and Aghabog ICA guilds, as well as some friends and relatives. The main rural electrification covering Clones town and environs, Smithboro, Newbliss and Drumcall, were electrified between 1959 and 1961, while areas further out such as Tydavnet and Scotshouse had been electrified much earlier (1948 and 1952/53 respectively), and there were strong memories in the area, both of life before the coming of electricity, and of the changes it brought. 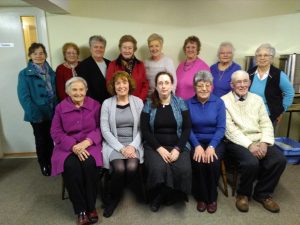 Sorcha travelled to Monaghan in February to meet the participants at a meeting of the Clones ICA, which included a group discussion of the experience of rural electrification in the Border counties (and some excellent cake). Geraldine, an experienced local historian, then carried out twelve interviews over the following weeks, gathering a wealth of memories about rural electrification and the ICA.  These interviews really demonstrate the depth of changes that rural electrification brought to rural Irish women, particularly reducing the back-breaking work of washing by hand and ironing with flat or smoothing irons. The differences in cooking also came up, with participants talking about the different ways of adapting the baking of brown bread in electric ovens. 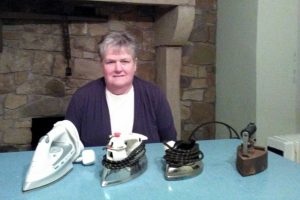 The history of the ESB was represented by an interview with Dan Kerr, who had worked for the ESB on their demonstration vans in the early 1960s, and shared his insights into selling techniques and merchandise. Some of the history of the ICA was also captured in Mamo McDonald’s interview, as she spoke about her experiences visiting An Grianán for training courses in the 1960s and the support within the ICA for rural electrification. Listen here to Mamo talking about some of the tactics used to convince farmers to install electricity and running water in the farmhouse, as well as the farm.

This is only a very brief glimpse of the wealth of discussion and memories in these interviews, which form part of the research for the Electric Irish Homes book and exhibition. Our thanks go to Geraldine O’Connor and all of the interviewees from the Clones area for giving their time and memories to the project!