Archive for the ‘ICA’ Category

The Electric Irish Homes textile art project involves a group of Mayo women working in textiles to respond to the themes of the Electric Irish Homes project and the Kitchen Power exhibition in the National Museum of Ireland – Country Life. Commissioned by Age & Opportunity and funded by the AHRC through Kingston University, Sligo artist Anna Spearman has been working with this group of women since August 2018 to develop their creative response to the impact of rural electrification in their lives.

This work will go on display in July 2019 as part of the Kitchen Power exhibition, but we held a showcase of the work in the National Museum of Ireland – Country Life as part of the Bealtaine Festival 2019, which celebrates the arts and creativity as we age.

The project started with a two-day trip to An Grianán, the Irish Countrywomen’s Association (ICA) adult education college in Termonfeckin, County Louth, where Sorcha briefed the group on the research and Anna ran a series of creative workshops in response. This kicked off a series of workshops in the National Museum of Ireland – Country Life, which included writing workshops with Fiona Keane from SixPens Creative Writing, a tour of the museum stores, and experimentation with both paper and textiles.

As part of the Bealtaine Festival, we held a textile art project showcase in the National Museum of Ireland – Country Life at the end of May. Sorcha and project participant Noreen Durken were interviewed by Tommy Marren on Midwest Radio a few days before the event, which brought in a large crowd on a very wet day.

Audience at the Electric Irish Homes textile art showcase, May 2019

The showcase started with a talk from Sorcha about her research about women’s experiences of rural electrification, which was followed by Anna Spearman and participants Noreen Durken and Maura McGuinness speaking about their experiences of the textile art project. Dr Tara Byrne, Arts and Culture Programme Manager at Age & Opportunity and Artistic Director of the Bealtaine Festival, spoke about the festival and its role in creating wider access to the arts and creativity across Ireland.

Maura McGuinness talking about her involvement in the project, May 2019

The showcase also involved a preview screening of a short film about the project by Brian Cregan, and a display of the textile work carried out by the participants, as well as notebooks, test pieces and some examples of their own work.

Project participants have also made up DIY craft packs, which will be available in the museum shop. These packs are based on four different designs produced by the group, and include a screen printed ‘pattern’ and a selection of fabric and threads for crafters to create their own versions of the designs. Photographs of the finished pieces can be uploaded to the museum Our Irish Heritage website, where they will be displayed later this year. 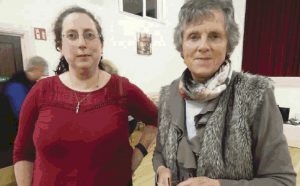 Coming out of the involvement of West Cork ICA with the project, we have just had this article in the Farming pages of the Irish Examiner, which talks about the oral history aspect of the research, highlighting the ICA members who have been interviewed.